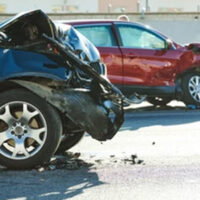 Multi-car collisions are an increasingly common problem on Florida’s busy highways. Just this week a four-car collision in Homestead, Florida killed a man, pregnant woman, and her unborn child. These accidents often occur due to a triggering event, such as one car rear-ending another or a semi-truck being cut off without enough time to correct. If there is insufficient room between cars to come to a complete stop, a moment of distracted driving by one driver can result in a massive pile-up of vehicles.

The Challenges of Determining Liability in Multi-Car Collisions

A car crash under normal circumstances can be devastating and physically and financially catastrophic. Determining liability in a multi-car crash can be a long and complex process. For instance, one driver may report another driver swerving into their lane out of nowhere, while the other driver may claim she was rear-ended into an unavoidable pothole that jolted them out of their lane.  Just these two differentiating reports can take a while to reconcile, as the insurance adjuster will likely attempt to talk to witnesses, gather traffic cam and dashcam footage, and any other evidence to come to a determination as to who was at fault, if anyone.

When multiple cars are involved in a collision the determination of liability can take months, as there are many more drivers and witnesses whose accounts must be weighed and considered. While victims wait for a determination to be made, they are often left to shoulder the financial burden of medical care and property damage alone.

The deceptively short answer is that the driver who caused the triggering accident is generally held liable for the resulting accidents.   However, Florida is a pure comparative fault state, which means that while the insurance company may assign fault to one driver, a jury will consider the comparative fault of each driver involved in the crash when assigning liability. For instance, if Car A is driving distracted and rear-ends Car B, resulting in a pile-up of cars C, D, and E, the insurance adjuster would likely find Car A liable for the crash. However, the conduct of all drivers involved in the crash will also be considered. If it is found that Car B had a broken tail-light, Car C was not driving with enough space between him and Car B, Car D was speeding, and the driver of Car E was talking on a cell phone at the time of the crash, all of these circumstances could be considered in determining how much each driver contributed to causing the overall accident. The total damages awarded to each driver is then reduced by a percentage proportionate to their fault. For instance, if Car D is found 10% liable for speeding, and is awarded $10,000.00 in damages, he will receive $9,000.00 ($10,000.00 – 10%).

If you have been injured in a vehicle collision that was not your fault, the experienced Plantation personal injury attorneys at Lyons & Snyder are prepared to help you get the support and compensation that you deserve. Call today and schedule your free consultation.